Using data to price car insurance isn't a new thing, but 'black box' insurance policies (technically known as 'telematics') haven't always been popular with everyone. Here we explain what black box car insurance is and why By Miles is different.

With premiums from traditional car insurers continuing to rise, it's understandable that drivers are looking for smarter and fairer alternatives. One way of doing that can be to go for a black box policy. So, question number one...

What is black box car insurance?

The phrase 'black box' is often used to describe insurance policies where a device collects data from a person's vehicle, helping insurers calculate risk, which gives them the ability to price individual policies more fairly.

Also known as 'telematics', this type of insurance is becoming increasingly popular. In fact, it's predicted that 50% of the world's cars will be insured by telematics policies by 2030.

But not all insurers who use telematics technology do things the same way. That's why - even though we use our Miles Tracker to record driving data and power our pay-by-mile policies - we like to think we've found a way to offer all the benefits of 'black box' insurance but have removed all the scary bits. 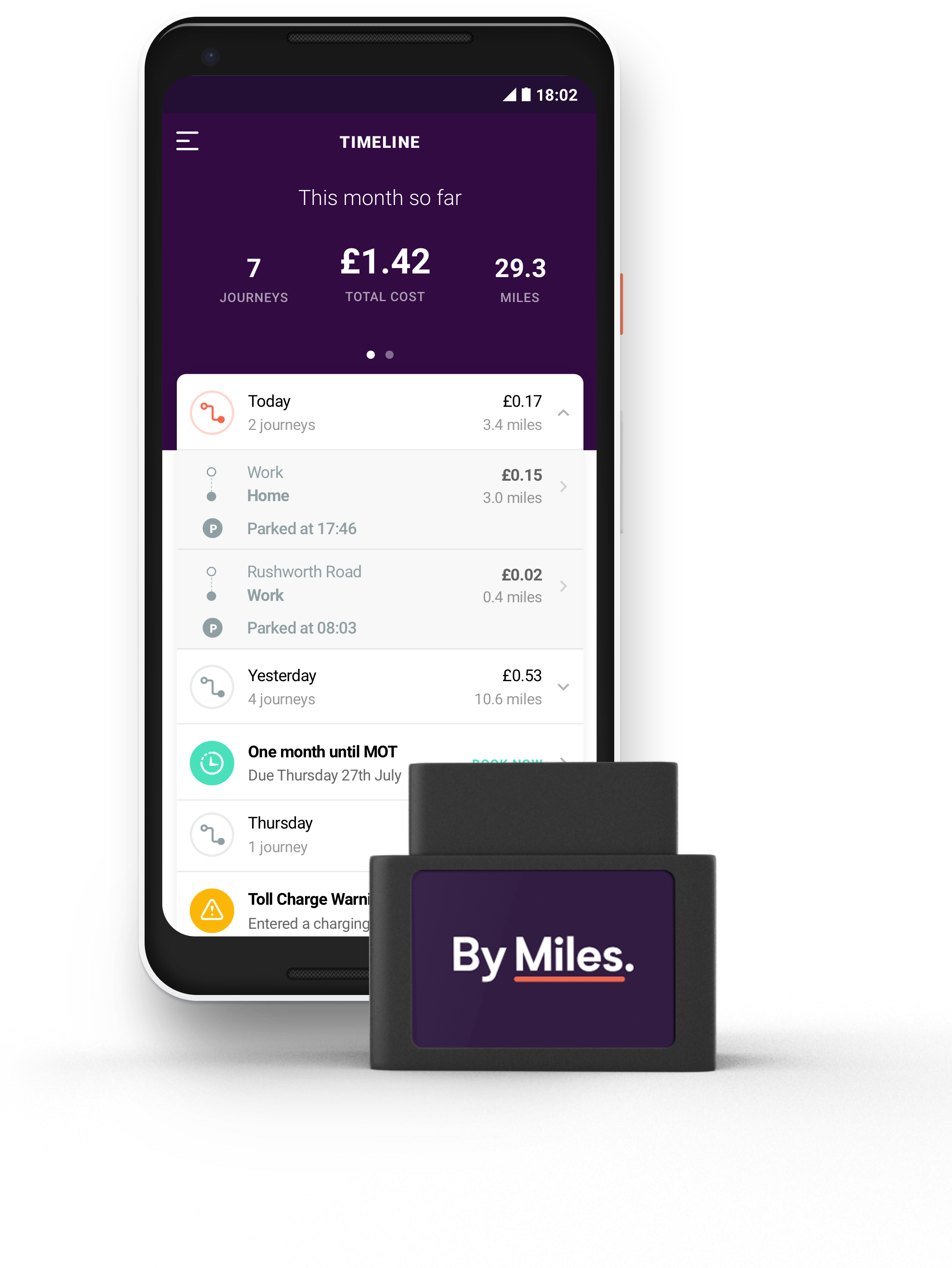 How do the old school black box insurance policies work?

The term 'black box' dates back to the early days of telematics, when the devices used to record driving data were large, clunky affairs.

An engineer would fit the box under your bonnet or dashboard and information about your driving would be fed back to your insurer.

The fitting wasn't the simple task it is these days. The engineer would come armed with superglue, screws and bolts, making sure that if you were taking out the insurance, your wouldn't be able to remove the box from your car without a great deal of effort.

The insurer would then use this information to get a better picture of your driving habits, the risk you pose and the premiums you should be paying.

How is the Miles Tracker different from traditional black boxes?

Our Miles Tracker - which measures the miles you drive each month - is a lot more discreet than the average black box.

While we have to admit it's still black in colour (we're working on that!), it's only about the size of a matchbox.

Better yet, our members can plug it into their dashboards themselves. It slots neatly into a car's OBD-II socket (which stands for On Board Diagnostics) which allows it to interact with its diagnostics system. This is quick and easy to do, and we give each of our members clear instructions specific to their car.

It's just as easy to unplug and cancel your policy if you want to move to another insurer too.

The device itself is one thing, but the more important difference is in what we use it for - and how that relates to our members' car insurance premiums...

How does pay-by-mile insurance from By Miles work?

"To borrow a phrase from a leading wood varnish provider: it does exactly what it says on the tin."

We started By Miles with a simple premise - people who drive less should pay less for their car insurance. From there we built a simple product that's straightforward and easy to use.

It works like this:
We use the Miles Tracker to (you guessed it!) track the number of miles you drive. The process of naming it was pretty simple really. To borrow a phrase from a leading wood varnish provider (this is not an endorsement), "it does exactly what it says on the tin."

Aside from an annual fee to cover your car while it's parked, you only pay for the miles you drive.

You can see how far you've gone - and journey-by-journey billing - in our app. That's it. The less you drive the less you pay. A simple formula, with nothing mysterious about it. 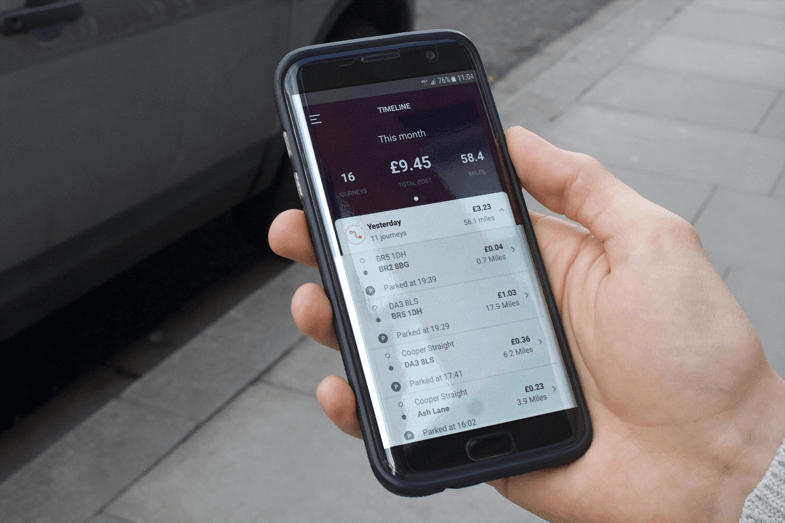 By Miles charges you by how far you drive, not by how well

At By Miles we measure how far our members drive, charging them on a per-mile basis. As well as rewarding low mileage drivers, this also has the benefit of being very black and white.

Most other 'black box' insurers use their telematics technology to measure how 'well' people drive - much more of a grey area.

Obviously, some elements of good driving are easy to measure objectively (things like whether you've broken the speed limit). But many aren't so easy. In any given situation an observer might say a driver did perfectly, while the data may disagree.

One driver complained to us that his telematics insurer regularly gives him a bad score for speeding on a road near his house, accusing him of driving 40 mph in a 30 zone. In actual fact the insurer's speed limit database is out of date, but they still haven't updated it so his premium keeps going up even though he's driving well. Hardly fair, is it?

"A driver complained to us that his telematics insurer regularly gives him a bad score for speeding on a road near his house, accusing him of driving 40 mph in a 30 zone.

In actual fact the insurer's speed limit database is out of date, but they still haven't updated it so his premium keeps going up even though he's driving well. Hardly fair, is it?"

If you're with a traditional black box insurer, it can sometimes be hard to know if a journey has taken your premiums up or down. And in a lot of cases, insurers won't help you figure it out.

If they do share the data or reveal the way they use it, it still may not make much sense - leaving you in the dark.

By contrast, with our app, you're able to see exactly how your monthly bill was calculated, see the details of each journey and estimate the cost of future trips - putting you back in total control.

Below, we've answered some final questions you might want to consider before going with a telematics insurer like us: 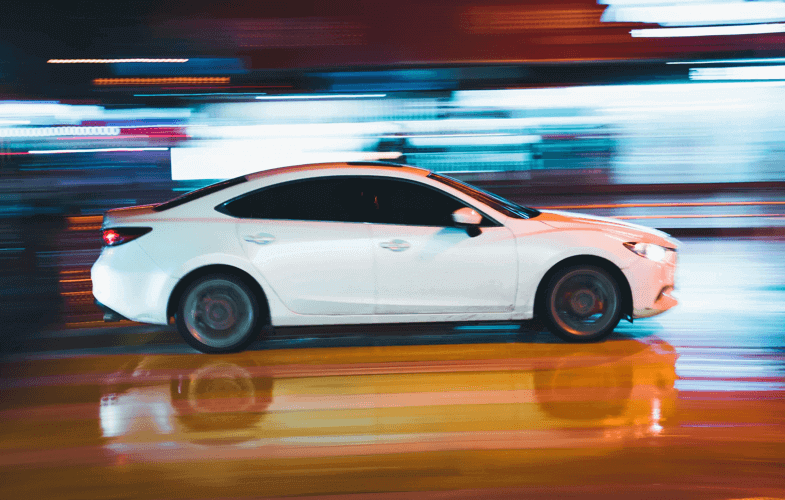 Photo by Alessio Lin on Pexels

Can I get black box insurance without a curfew?

Yes. While some other black box policies charge extra at times they consider to be high risk (such as driving at night), we don't.

Can I get black box insurance without pay how you drive penalties?

Yes. Some telematics insurers do raise premiums based on how their customers drive. We only charge based on how far you drive, not how you drive. (That's assuming you avoid accidents and stay within the law, obviously).

Does black box insurance track where you drive?

Yes. Our Miles Tracker sends us information on where you've driven. This helps us work out the distances you've travelled.

We understand that holding data on our customers is a big responsibility and we're proud of the way we go about it - so proud that we'd like to this opportunity to direct you towards our plain English privacy policy.

Do black boxes tell the police if I'm speeding?

No. While we can't officially speak for other insurers (though we're pretty confident they wouldn't either), we'll never share any of your personal driving data with the police, unless we are obliged to as a direct result of a court order.

Will the Miles Tracker interfere with my car?

No. It's hidden away in your OBD-II socket and shouldn't interfere with your car or your driving in any way.

If you want to put it in another position in your car, we'll send you an extension cable free of charge.

Will I be fined if I go over my estimated mileage?

No. That's because there is no estimated mileage. We charge for the actual numbers you've driven, calculating your premium automatically and in real time.

The only time we use estimates is if you want to plan a future journey, or to give you an approximate idea of what your annual insurance cost will be.

What if I need to make a long journey?

While our insurance is designed for low mileage drivers, we understand that every now and again our customers may have to make a lengthy trip (those pesky distant relatives...)

That's why we cap the number of miles you can be charged for in single day at 150. You'll never be charged more than that.

What are benefits of telematics insurance the way By Miles does it?

As well as being more transparent, there a few more reasons we like to think we offer more than the typical black box insurer.

Our Miles Tracker does more than just track miles - it provides a range of features that make owning a car a bit less of a hassle. For example, it can help you locate your vehicle if its been lost or stolen. It can even let us know if you've been in an accident so we can - if necessary - get help to you.

It also keeps tabs on the health of your car and will let you know if there are any issues you should get a mechanic to look at. That means you should be in good shape when your MOT comes around. Speaking of MOTs, we'll send you a reminder when yours is coming up.

And when it comes to making a claim, the Miles Tracker can offer insights into how the accident occurred, speeding up the claims process. 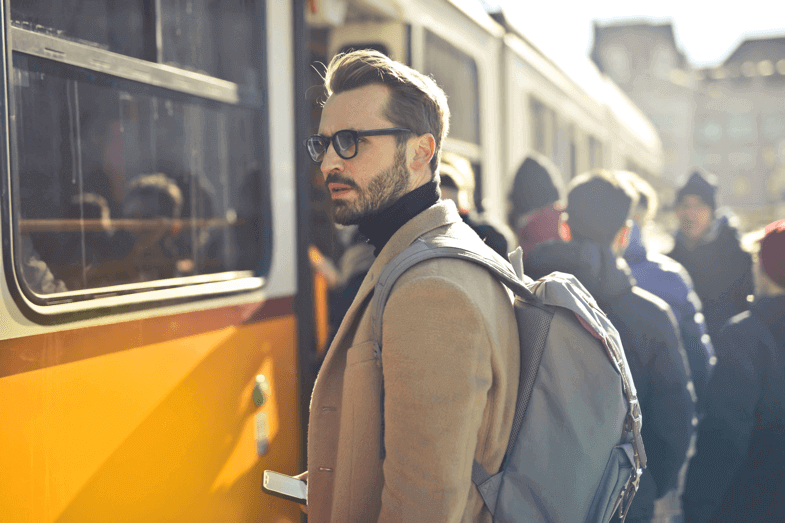 Photo by bruce mars on Pexels

So who is black box or telematics insurance for?

Many black box insurance providers target young and inexperienced drivers - the idea being that they can avoid sky high premiums by providing data that shows they aren't the liability they're so often assumed to be.

Naturally, that depends on the insurer - via whatever mysterious processes they use - deciding whether the customer is a good driver or not.

As we've explained, that's not our model.

We only measure your mileage. That means that anyone who spends less than average time on the road could benefit from a By Miles policy.
How do you know if you're a low mileage driver? We wrote this article to help you work that out, beginning with a list of groups who tend to be low mileage - take a look.

Why not get a By Miles quote?

A telematics policy could provide you with a good way to save money on your car insurance. And you don't have to put yourself at the mercy of some obscure algorithm to do it either.

With By Miles you get totally transparent car insurance.

If that sounds good, be one of the first to get a pay per mile car insurance quote.