The last ten years of MOT data from the Department for Transport have shown that mileage is steadily decreasing each year, and the Government’s latest stats show this reduction continuing.

After the last batch of MOT data was released over a year ago, we published analysis that showed UK drivers were driving less each year. Considering the year-on-year trend, as well as the impact of lockdown in the UK, it’s set to reduce even more steeply for 2020.

Based on 2015-2019 data we project the average annual mileage for UK drivers in 2020 would be 6,970 miles, but due to the nationwide lockdown during coronavirus, that annual mileage will likely end up much lower.

Looking at the mileage driven on our real-time policies, our Miles Index shows a decline in mileage of 58% since the UK locked down on 23rd March 2020, so with 3 months of reduced mileage due to Covid-19, we estimate that this annual average will drop to just 5,960 miles.

Following the release of this latest data, our team has crunched the numbers, looking at the average mileage driven across the country, pass rates for different makes and models of car, and even which day you should get your MOT done to increase the chances of passing. You can read the full analysis below. 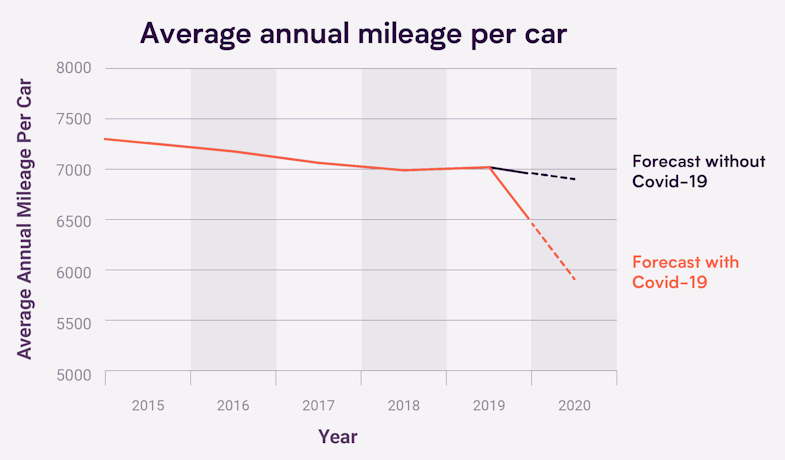 The 2020 UK mileage forecast from By Miles:

Which car makes and models have the best MOT pass rates?

Japanese and German car manufacturers still dominate the top spots when it comes to pass rates, with Lexus boasting the highest percentage of MOT passes, followed very closely by Honda and Porsche.

French-made motors showed some of the worst MOT pass rates for 2019. Renault is bottom of the list, falling two spots lower than in 2017 data, despite now having a slightly higher pass rate than its previous 82.5%. Citroen has also had a 0.2% pass rate increase, but has overall dropped down one spot since 2017, to second worst pass rate for 2019.

Despite not making it into the top five brands list, Toyota has come away with a third place spot on the top five models ranking, with its hybrid car, the Prius. The Honda Jazz and CR-V, both with a maximum 5-star safety rating from Euro NCAP, take the top two places for having the highest pass rates.

The Renault Megane was the car most likely to fail its MOT in 2019, with Renault’s Clio just two spaces above it.

Not enough analysis for you? Here are some quick links to even more data.

However the By Miles’ Miles Index shows motorists driving 58% less than normal since lockdown began on 23rd March 2020.

With 3 months of reduced mileage due to the Covid-19 lockdown in the UK, we estimate the average mileage per car for 2020 will drop to 5,960 miles.

MOT pass rate by day of the week.

Sunday is the best day to get your MOT done with a 2% increase on its pass rate from 2017 figures, followed closely by Saturday.

Trends seem to suggest that the earlier in the week you do your MOT, the worse the result will be. Monday remains the day with the lowest pass rate, with the percentages becoming consistently higher as you move further through the week.

Diesel cars have the highest average mileage according to the data, followed closely behind by Hybrid cars. Petrol car drivers are now driving the lowest annual mileage on average, despite making up the majority of MOT tests overall.

Hybrid cars have the highest pass rate, despite petrol and diesel cars having a much higher volume of passes. Diesel cars statistically have the lowest pass rate out of all fuel types, which will most likely be affected by the fact that they tend to be driven the highest mileage.

Turquoise, maroon and brown cars continue to have the highest pass rates based on the 2019 data, staying consistent with the previous MOT data from 2017.

Orange cars are experiencing a revival as they’ve jumped from the 14th spot to fourth place, while cream and multi-coloured cars remain at the bottom of the list. Black and white cars continue to be the most popular colour choices for drivers, but are placed third and fourth last in terms of their MOT pass rates.

It’s tight at the top, with Lexus, Honda and Porsche leading the way, while Renault, Citroen and Dacia trail at the bottom. Lexus has jumped from fourth to first place compared with the 2017 data, while Smart has had a huge drop from fifth in 2017, to 16th place in 2019’s list.

The Honda Jazz reigns supreme with a 95.4% MOT test pass rate, clinching the top spot in 2019 (having been second highest pass rate at 95.3% when we last did this analysis for the 2017 MOT data). Honda and Toyota both have two entries in the top five, with Toyota adding a third to complete the top ten. French cars from Renault and Citroen continue to dominate the bottom of the list.

Notes: The above only includes models with more than 10,000 cars tested for the year, and cars that were 3 to 5 years old.

Tesla drivers are clearly making the most of their new wheels, driving the most miles on average, though this is based on a low number of MOTs due to their newness on the scene. Dacia has gone from first to fourth place in 2019 compared with the 2017 MOT data, while Skoda and Mercedes retain second and third place.

Notes: The above only includes makes with more than 25,000 cars tested for the year. And Tesla!

Drivers in the Enfield postcode area have a confident lead with the highest pass rate in the UK, followed by Slough. Eastern Scotland has the lowest pass rate, followed by the South West of England. The people of Dorchester boast the oldest cars being taken for MOT, while the Motherwell in Scotland tend to have some of the newest cars.

Unsurprisingly, the newer the car, the higher the MOT pass rate. However, when you get to cars that are over 50 years old, the pass rate starts to increase to over 80%, with cars that are 71 years old having a better pass rate as cars that are 3 years old (we are in awe of all of you classic car owners, you sure know how to look after a motor).

Unsurprisingly, the months when the new registration plates are released tend to be the busiest at MOT centres. March is the most popular month for MOTs, followed by September. December is the quietest as people wind down for the festive season, with November not far behind.

MOT bookings by day of the year.

The highest day’s MOT pass rate of 2019 goes to Christmas Day (25th December), at a massive 100%. So if you can find a garage that will test your car on that day (it was the quietest day of the year with only 52 tests carried out in total in 2019, so it may just be one or two open), then it’s well advised.

The lowest pass rate day of the year was January 3rd (71.5%) as the excitement of New Year’s Eve begins to fade, and the testers start to wonder why they were giving December’s cars such an easy ride.

The data continues to show that the safest cars are driven by low mileage drivers. Cars driven 7,000 miles per year or under have an average pass rate of 90%, compared with 83% for those that drive over 10,000 miles per year.

Drivers with an annual mileage of around 1,000 miles have the highest pass rate, and, as you’d expect, the pass rate decreases the further cars have traveled.

Similarly to our 2017 analysis, London and the South East of England continue to be the lowest mileage drivers, with motorist in South West London covering the lowest average mileage in 2019.

Note that XX is a non-geographic postcode area used by online retailers for Royal Mail returns.